This section describes some of the design and construction techniques and devices commonly used to create a low-damage building using timber.

Overseas, commercial and multi-unit residential buildings have been built as high as 10 storeys, and taller buildings are planned. The tallest timber building in New Zealand is 6 storeys, and most are less than 3 storeys high. (Compare this with houses built according to NZS 3604:2011 Timber-framed buildings, which limits residential timber construction to 2.5 storeys.)

While timber technologies are continually improving and taller timber structures are being designed, they have yet to be built in this country. In practice, factors such as wind and gravity loads, fire safety and acoustics limit the height of timber structures more than concerns about their rigidity and seismic performance.

Nevertheless, many of the concepts covered in the sections on concrete and steel also apply to multi-storey commercial timber structures, and this section looks at a few of them. As with the other materials, some techniques in timber work best when combined with other systems. Others can provide a stand-alone resilient solution or be retrofitted into an existing building to improve seismic performance. 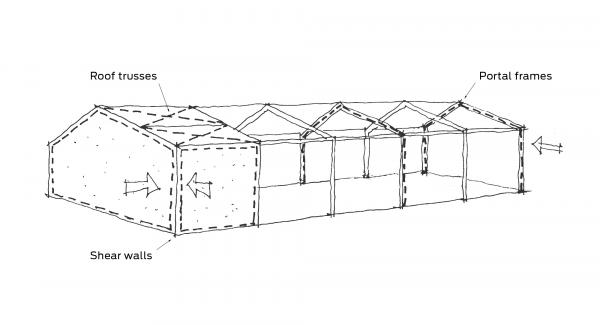 Elements of a timber structure designed to resist earthquake forces.

Timber moment frames are most often used in single-storey buildings, but they are suitable for any large buildings with few internal walls, such as industrial buildings or multi-storey open-plan offices.

Timber moment frames must be designed and constructed with enough rigid connections to resist lateral seismic forces. Because of the additional expense of these moment-resisting connections, moment frames are generally not as common as traditional nailed light-timber frames.

Structures that use timber moment frames also tend to have much greater flexibility than designs that use shear panels. A multi-storey office building that uses a moment frame, for example, may need to be designed with stiffer shear panels around the lift shafts or stairwells to control lateral deflections.

A variant of the moment frame, known as a portal, is a two-dimensional frame that consists of two upright columns supporting a rigidly connected cross beam or pitched rafters. A portal frame is a continuous type frame, and several portal frames can be connected together to create a stable three-dimensional space.

The lateral strength of the structure is derived from the stiffness of the members and the rigidity of the connections between them. Therefore, timber portal frames are commonly prefabricated using engineered wood products, such as laminated veneer lumber (LVL) or glue-laminated timber (glulam).

Portal frames are generally suitable for single-storey construction because they allow long spans and open interiors, making then suitable for many commercial and industrial building applications. Historically, many schools, public buildings and industrial complexes in Christchurch use this technology, and they generally performed very well in the 2010 and 2011 earthquakes.

Portal frames are also very widely used in steel construction, but their performance in timber is noteworthy.

Timber may be strengthened with diagonal concentric or eccentric braces made from timber or steel. The braces can be designed to resist loads in tension or compression, but it is preferable if they’re able to resist both.

Timber frames often use a series of steel diagonal braces as a horizontal load -transferring element at roof level in place of a diaphragm , although rigid wood-based sheet elements are also commonly used.

In timber buildings with pitched roofs, braces are usually located in the plane or space of the roof, but they may also be placed in the ceiling plane. In this case, the bracing acts as a horizontal truss, transferring seismic forces from the horizontal framing members to the vertical elements and down to the foundations.

Pres-Lam uses a series of timber beam and columns members connected together with high-strength post-tensioning tendons or steel bars to create a moment frame. The tendons run inside internal ducts in the beams for the full length of the structure, passing through holes in the columns and providing moment-resistance at each beam-column joint.

The columns are usually prefabricated from flat panel sections made from laminated veneer lumber (LVL), glue-laminated timber (glulam) or similar. 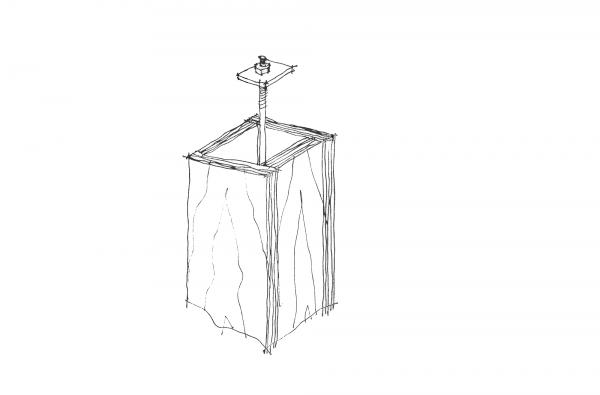 During a minor earthquake, the additional frame stiffness provided by the tensioning reduces movement of the structure. When exposed to larger lateral seismic forces, the structure will oscillate as the elastic action of the tendons allows gaps to open and close between individual members within the frame (rocking joints). The tendons pull the structure back into its original position as the shaking subsides.

Post-tensioned systems are usually combined with dissipation devices to limit the amplitude of the displacement and dampen the rocking oscillations as quickly as possible. If the rocking becomes too severe or continues for too long, the relatively large vertical and horizontal accelerations as the joints rock back to their original position can cause damage.

Pres-Lam sometimes uses additional strengthening at the top and bottom of the beam to increase the moment resistance of the beam-column connections. This can be provided by ductile steel braces, which also helps to dampen lateral movement under seismic load .

Where shear walls are part of the design, hysteretic dampers, usually U-shaped flexural plates, can also be bolted into the spaces between adjacent walls to couple them together and further dampen the seismic response. A Pres-Lam structure under test at the University of Canterbury. (NZ Wood)

In low-seismicity regions, the post-tensioning provides sufficient stiffness to resist the likely seismic loads, and the design may omit the damping devices from the building.

Pres-Lam suffers from a few drawbacks, including beam elongation as the system rocks back and forwards. As gaps open and close, the ends of the beam can separate from the support columns or floor slab, causing the floor to tear as the gap opens at the top. Essentially, the entire structure tries to increase in size. This can cause significant damage if the design does not accommodate the expansion in the floor and roof diaphragms and non-structural components, such as internal linings and flooring.

Beam elongation can be a common problem in all post-tensioned structures that are designed to rock under lateral load .

Nelson Marlborough Institute of Technology building
The Nelson Marlborough Institute of Technology’s (NMIT) Arts and Media facility is a 3-storey Pres-Lam structure built in 2011. The vertically post-tensioned walls were prefabricated off site and lifted into place to be connected at the foundations. The walls are post-tensioned to the foundation through high-strength steel bars, with a cavity in the wall for the steel bar couplers. Steel U-shaped flexural plates link the pairs of structural walls together and provide dissipative capacity to the system. All structural elements, including the beams, columns, walls and floors, are constructed of laminated veneer lumber (LVL).