This section describes some of the design and construction techniques and devices commonly used to create a low-damage building using concrete.

Base isolation systems place specially designed bearings between the foundations and the superstructure, decoupling the building and removing its rigid horizontal connection to the ground. During a seismic event, horizontal ground accelerations are not or are only partially transferred upwards through the bearing, preventing or reducing damage to the structure.

Base isolation can be imagined as a simple building resting on perfect rollers. When the ground moves suddenly to the left or right, the rollers turn, but the building itself stays in the same position. This is because the horizontal force of the ground movement is not transferred through the rollers, and no force is acting on the building.

If the same building were placed on a flexible rubber pad and the ground moved in the same way, the pads would partially resist the lateral forces. This would transfer some of the force through the pad, and the building would move. However, the force would be much less than if the building were fixed directly to the ground. This is a key principle of base isolation . Comparison of a fixed foundation building (left) and a base-isolated building (right) under lateral load.

As well as allowing movement during an earthquake, base isolators are often also designed to dissipate energy. This adds damping to the system and further reduces the seismic response of the building.

While base isolation can add significant expense to the cost of a building’s foundation, the total design and construction cost is often only slightly more than a conventional building. This is because base isolation helps to protect the contents and structure of everything above the isolation plane. Significant seismic resilience can therefore be achieved even with a relatively economical building. The technique can also be used to retrofit existing buildings. In practice, some lateral resistance is still necessary to oppose everyday wind forces.

Although base isolation is now one of the oldest and most widely used damage-avoidance techniques for concrete structures, it is not suitable for all buildings. Base isolation as a concept works because it changes (reduces) the horizontal stiffness of the building so that it does not respond with amplification the way a conventional building does. It is most effective for low to medium-rise buildings on firm ground. Taller high-rise structures have higher overturning forces that are not easily resisted by base isolation systems. Buildings on very soft soil are also not suited to base isolation.

The base isolators take many forms, including sliding bearings, solid metal plates and some that actually look like large rubber pads, but they all fall into two categories – elastomeric bearings and sliding isolators.

An elastomeric bearing typically consists of alternating layers of metal plate and a thin elastomer, such as natural rubber or neoprene.

In a laminated rubber bearing, the layers are bonded together in a way that provides as much vertical rigidity and horizontal flexibility as possible. The upper and lower faces of the bearing are typically fitted with steel plates that connect to the top of the foundation and the underside of the building.

A similar version, sometimes called a lead rubber bearing, has a solid lead core running through the centre, which acts as an energy dissipater as it deforms horizontally. 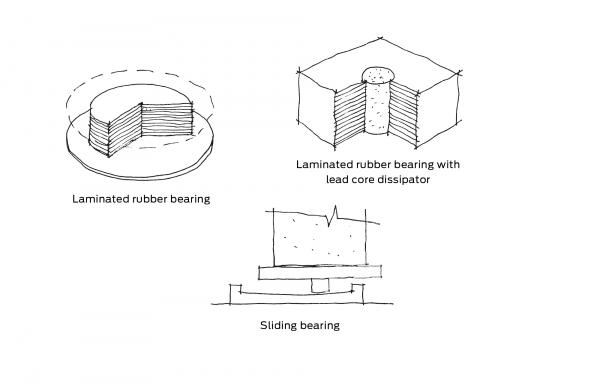 A sliding isolator works by allowing the building to move independently from the foundations, much like the rolling example described above.

A widely used sliding isolator, called a spherical sliding bearing, uses a concave surface and a low-friction spherical bearing or pad to support the building. During an earthquake, the spherical bearing slides across the concave surface, moving both horizontally and vertically according to the concave face of the surface. The force required to lift the building near the outside edges multiplied by the lift height is the energy that is dissipated. This is enough to limit the lateral forces that are exerted on the building. 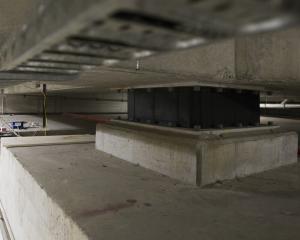 Linked to the existing central hospital facilities, this 10-storey base-isolated building was opened in 2005. The hospital is a dedicated essential services facility, selected to provide on-going recovery services immediately following a major natural disaster, hence the decision to adopt base isolation .

The hospital was fully operational immediately following both the September 2010 and February 2011 earthquakes.

A post-tensioned system is a technique to strengthening a column or beam by placing it under compression with unbonded high-strength steel bars or tendons. The tendons are tensioned so that they remain in a permanent state of stress throughout the life of the building. The technique adds strength by clamping and holding the members tightly together.

The PREcast Seismic Structural System, or PRESSS , is a form of low-damage system that uses post-tensioned technology.

The system uses a series of precast concrete members joined together with unbonded post-tensioning tendons or steel bars to create a moment frame.

During a minor earthquake, the additional stiffness of the frame reduces movement of the structure. When exposed to larger lateral seismic forces, the elastic action of the tendons allows gaps to open between the individual members within the frame. The structure will oscillate or rock side to side in a controlled manner. The tendons pull the joints and therefore the structure back into its original position as the shaking subsides. 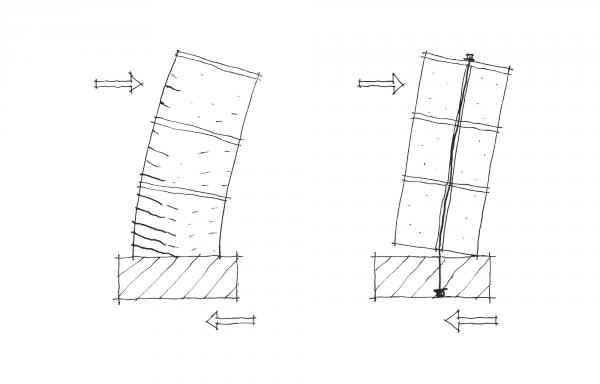 Comparison of a yielding shear wall (left) and a rocking wall (right) under lateral load.

The key to PRESSS is that the steel tendons are unbonded, unlike conventional structures where the steel is physically joined to or embedded within the surrounding concrete. In an earthquake, the concrete members are free to rock from side to side at the joints, while the steel tendons provide the tension forces to hold everything in place. 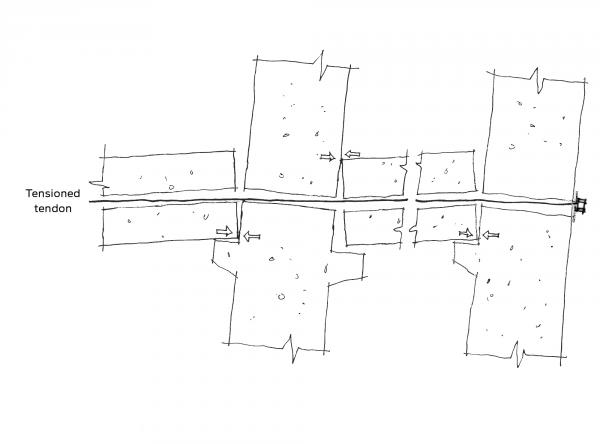 PRESSS creates a controlled rocking motion in response to a seismic event.

Post-tensioned systems are usually combined with dissipation devices to limit the amplitude of the displacement and dampen the rocking oscillations as quickly as possible. If the rocking becomes too severe or continues for too long, the relatively large vertical and horizontal accelerations as the structure rocks back to an upright position can cause damage.

PRESSS suffers from a few drawbacks, including beam elongation as the system rocks back and forwards. As gaps open and close, the ends of the beam can separate from the support columns or floor slab, causing the floor to tear as the gap opens at the top. Essentially, the entire structure tries to increase in size. This can cause significant damage if the design does not accommodate the expansion in the floor and roof diaphragms and non-structural components, such as internal linings and flooring.

Beam elongation is not limited to concrete structures. It is also a common problem in tensioned steel and timber structures.

A damping device, or damper, is a dissipative mechanism placed within a structure to increase the building’s capacity to absorb seismic energy. All buildings naturally dissipate energy, but dampers greatly increase the building’s ability to remove energy from the system quickly, thereby limiting the amount of damage it can cause.

Damping devices work by suppressing the building’s response to lateral forces. They can be used by themselves or as part of a hybrid system to improve other low-damage systems, such as base isolation or PRESSS . Retrofitting dampers within a structure is often easier than retrofitting base isolators under it. They are especially suitable for tall buildings that are not suitable for base-isolation techniques.

A wide variety of damping devices are available for use in concrete structures. 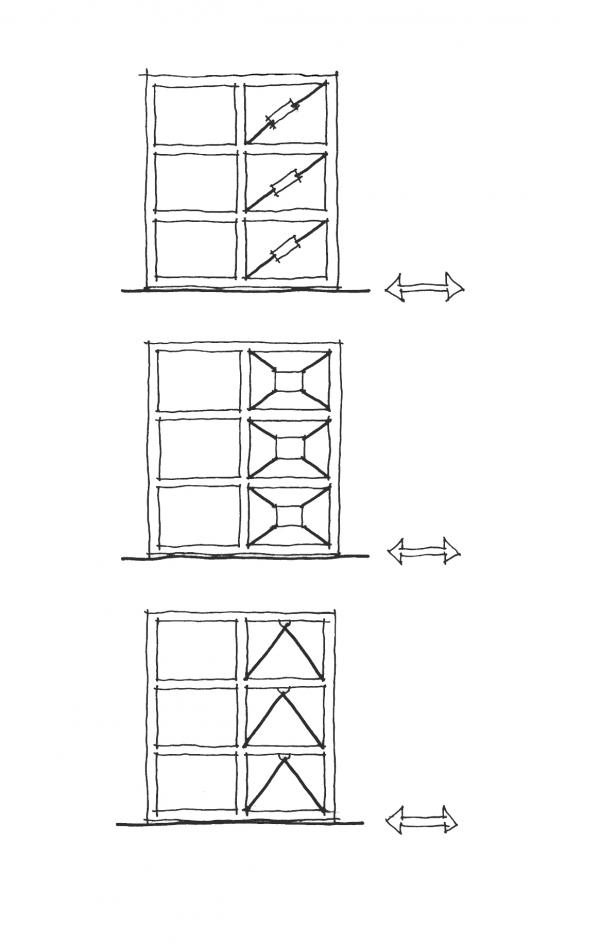 Common placement of damping devices in a moment frame.

A fluid damper consists of a piston enclosed in a cylinder filled with a viscous fluid, such as silicone oil. The dampers work by transferring kinetic energy from the structure into the fluid in the form of heat as the piston is forced through it, much like a car shock absorber.

Fluid dampers may be designed to simply dissipate energy, or they may also include a spring action, which acts against the force causing the displacement. They may be one of the best ways to reduce the damage caused by very large and rapid ground accelerations. However, the cost of viscous dampers is generally considerable. 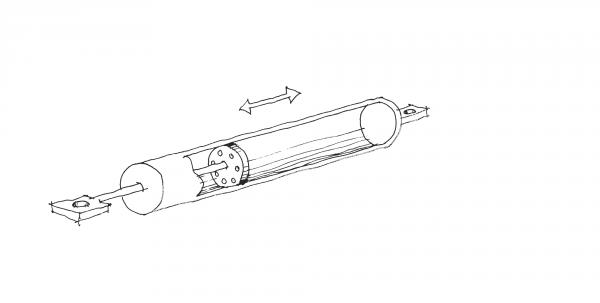 A variant of the fluid damper is the lead extrusion damper, which uses a solid lead core as the viscous material. This device works by pushing a shaft with a bulge in it through a hollow core of lead. It transfers kinetic energy from the earthquake into the lead, creating heat and making the material more malleable. 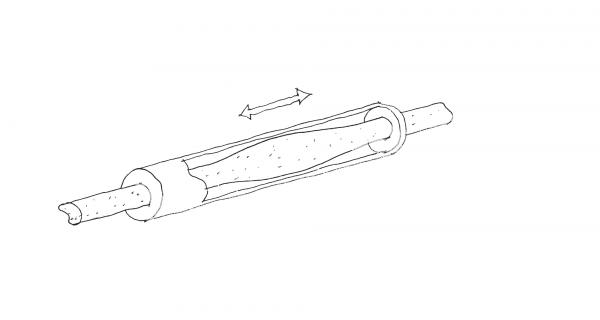 A viscoelastic damper uses an elastomer material, such as rubber or neoprene, sandwiched between two metal faces. During an earthquake, energy is absorbed by the controlled shear of the elastomer.

Several varieties are available, including solid and fluid viscoelastic dampers, and systems that also include friction effects. A hysteretic damper , or yield damper, consists of a member with a metal, often steel, component.

During an earthquake, the damper absorbs energy by allowing the metal to yield, either by bending or in tension and compression, depending on the design of the damper.

U-shaped flexural plates and triangular bending plates are common types of bending hysteretic damper used in many types of structures, including concrete.

U-shaped flexural plates are installed between closely spaced structural walls that are expected to rock independently.

They are designed so that the yielding of the steel is spread over a length to avoid high strains and cycle fatigue.

Tension and compression devices are designed to yield along their length and must be restrained to avoid buckling in compression.

This is commonly achieved by using a steel tube as the yielding material and filling it with concrete or epoxy to act as a restraint. 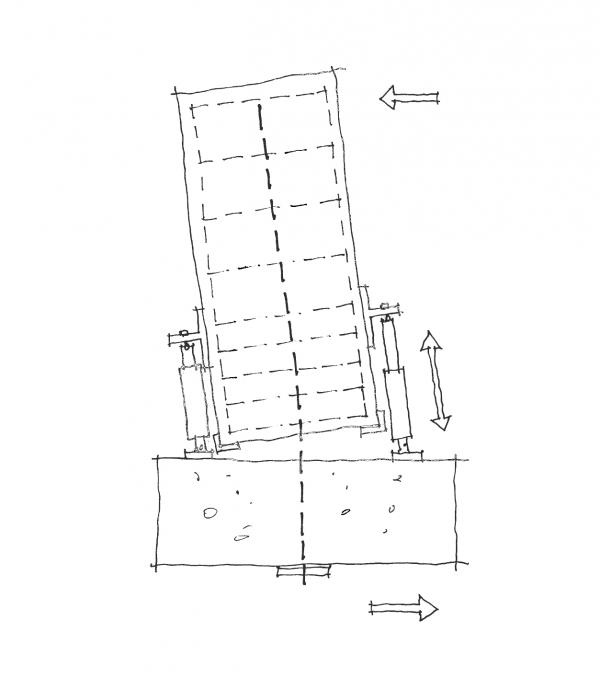 Southern Cross building, Christchurch
The Southern Cross Hospitals’ Endoscopy Consultants’ Building in Christchurch uses PRESSS frames and walls coupled together with U-shaped flexural plate dampers. One advantage of the combined rocking-dissipative solution is the ability to tune the level of floor accelerations to better protect both structural and non-structural elements, including the hospital’s acceleration-sensitive equipment.

This video includes an examination of the design and construction of the Southern Cross endoscopy building.