Unreinforced brick and concrete masonry (URM ) structures perform poorly in earthquakes. In an earthquake, parts of masonry can break away from a URM building, and entire parapets or parts of the façade can collapse onto the ground.

The majority of buildings constructed using URM consist of external structural masonry walls that do not contain supporting elements in conjunction with cast iron or steel columns and timber beams. Internal masonry walls may also be present that support flexible timber floor diaphragms and roof trusses. URM buildings are often older buildings that have parapets, as well as verandas, balconies, ornaments, chimneys and signs attached to their façades. 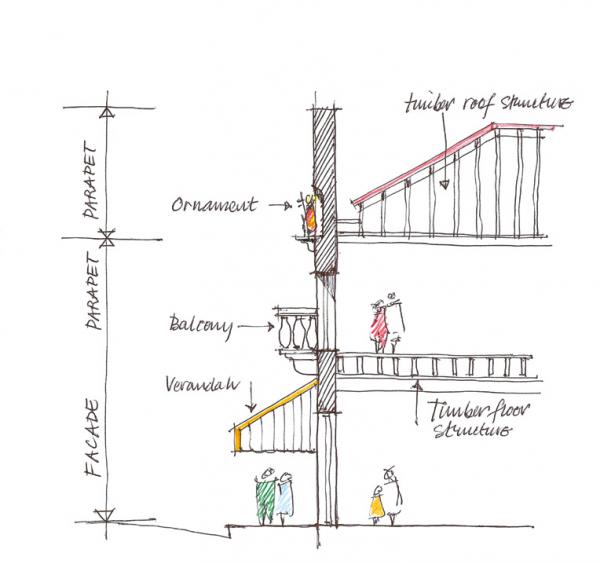 The façade and parapet of a typical small, street-facing commercial building. (Image sourced from MBIE's Securing parapets and facades on unreinforced masonry buildings)

The seismic performance of a URM building is largely determined by the quality of the connections between the external URM walls and the flexibility of the internal timber diaphragm . These connections often consist of steel anchors, which are also used to restrain features such as parapets. The brittle nature of the URM walls means that, if they are overloaded, they will collapse, and the support for the floors and roof is lost. In all cases, the securing details for each building require specific engineering design.

This type of securing can be used for a hipped roof and the side walls of a gable structure, although the technique can be used where other elements make up the roof framing and trusses of the URM building. A typical method to secure a URM parapet to the roof structure. This example shows a solid masonry parapet anchored to the trusses of a hipped roof where the trusses run perpendicular to the parapet. However, many other securing arrangements are possible. (Image sourced from MBIE's Securing parapets and facades on unreinforced masonry buildings)

When securing the parapet to the roof structure, it is essential to use suitable flashings and consider other weathertight issues during design and installation.

If the building is greater than 2 storeys, the façade should to be secured to the uppermost floor structure. A typical method to secure a URM façade to the floor structure. This example shows a solid masonry façade anchored to floor joists perpendicular to the façade. However, other securing arrangements are possible. (Image sourced from MBIE's Securing parapets and facades on unreinforced masonry buildings)

If the wall is unable to span vertically, mullion elements will need to be added that can be tied to the new roof strengthening and the floor below.

If the building has a stair or void on the façade, a beam should be fitted along the internal face of the walls and tied back into the floor at both ends.

For URM buildings, it may be possible to add retrofit bracing to support URM structural walls and contain the out-of-plane movement. Retrofitted bracing must be carefully designed with professional engineering input to ensure it has a sufficiently stiff response to protect the URM before it is damaged.

Some of the more common types of URM retrofit include the addition of:

Many URM buildings in Canterbury that had been retrofitted with these systems showed no sign of damage following the 2010/11 earthquakes. However, others were still severely damaged, with poor connections between the old and new components being one of the common contributing factors. In most cases, however, the retrofits did prevent the building from collapsing. An example of a retrofitted steel moment frame used to support a URM building. (Jason Ingham, University of Auckland)