These techniques use added material to strengthen the soil.

Solidification techniques involve either mixing cement or other additives into the soil to bind the soil particles together. The process works by filling the interparticulate voids in the soil. This prevents excess pore water pressure, which stops liquefaction from occurring.

The binding process can also increase the strength and stiffness of the soil, making solidification an effective measure to mitigate differential subsidence.

Solidification offers a high degree of confidence that liquefaction will not occur within the remediated zone. When the full depth of liquefiable soil is solidified, liquefaction effects can be eliminated entirely.

Solidification techniques are relatively quiet and induce relatively small vibrations compared to compaction methods. In addition, soils usually do not need to be treated outside the perimeter of the building, although this can be difficult to control.

Soil mixing is most often used with soft silty soils. Because they are easier to mix, the technique is easier to use with cohesionless soil than cohesive soil. Large rocks and boulders can be a particular problem.

Soil mixing is typically carried out using a rotating drum cutter attached to an excavator arm – a process that is limited to a depth of around 6 m.

Other methods use rotating augers or blades attached to rods to mix soils in vertical columns up to depths of 30 m or more. This technique is commonly referred to as deep soil mixing.

Off-site soil mixing involves excavating the site to the target depth, transporting the excavated soil off site, mixing it with the binding agent and replacing the stabilised soil back into the excavated site. The material is replaced and compacted in layers to form a stabilised crust over the full area of the site. 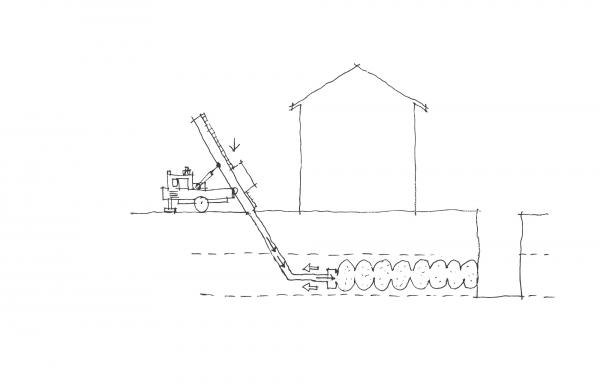 Horizontal soil mixing mixes soil and cement below ground to create a series of horizontal beams that stiffen the soil. As at early 2015, it is the only method that can be applied while the site is occupied.

Jet grouting uses a high-pressure jet to inject a mixture of water, air and grout into the soil. The pressure of the jet loosens and breaks up the soil, enabling the mixture and soil to combine more effectively.

The technique can be used to construct grout panels, full columns or anything in between (such as partial columns) with a specified strength and permeability.

The process to construct jet grouting columns involves drilling to the base depth and using a series of rotating high-pressure jets (usually located just above the drill head) to mix a cement slurry with the soil as the drill is withdrawn. Using specialist equipment, columns can reach diameters up to 8 m.

The main benefits of jet grouting over other remediation techniques is its ability to target specific soil layers and treat multiple depths at a single location.

Permeation grouting or chemical grouting involves injecting a permeating agent to transform the soil into a hardened mass.

The hardened grout improves the soil by filling the voids between soil particles and binding them together. This increases the soil’s stiffness and strength, decreases permeability and minimises the tendency of the soil to contract during shearing.

Permeation grouting is most suited to moderate permeability liquefiable gravels and sands.

It offers minimal site disturbance and can treat liquefiable deposits adjacent to existing foundations or buried structures. However, it tends to be more expensive than other techniques and, due to the nature of some grouts, requires environmental control to prevent groundwater contamination.