Densification involves increasing the density of the soil by compacting it.

Densification or compaction methods involve rearranging the soil particles into a tighter configuration, resulting in increased density. This increases the shear strength and liquefaction resistance of the soil.

Densification has the advantage that the degree of treatment can be easily verified, and if liquefaction is triggered, displacements are almost always reduced.

Nevertheless, densifying loose, sandy deposits with vibration or impact compaction has been used extensively, making it one of the most popular liquefaction countermeasures.

Dynamic compaction involves repeatedly dropping a heavy weight (typically 5–20 tonnes) onto the surface of the ground to increase the density of the soil directly below the impact point.

As the soil compacts, large impact craters form on the surface, which must be repeatedly filled and recompacted until the soil reaches its target strength.

The drop height, weight and spacing vary depending on the ground and groundwater conditions.

Dynamic compaction has been widely used on projects in New Zealand, and it can provide an excellent degree of ground improvement . It is known to be fast and economic, especially in treating large areas. However, the high level of vibration generated during the procedure means it may not be suitable for vibration-sensitive areas or sites close to high-value structures.

Rapid-impact compaction is a smaller-scale version of dynamic compaction. It uses a pile-driving hammer attached to a large steel end-plate installed on the arm of an excavator. The end plate is driven into the ground with rapid hammering.

This increases soil density by compacting the surface layers as the plate is hammered and through vibro-compaction of lower soils.

Rapid-impact compaction can improve ground density down to several metres and is particularly suited for sandy soils in areas where there is adequate distance from neighbouring buildings. 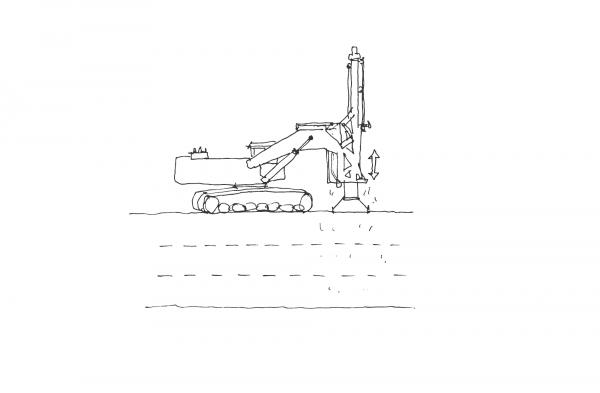 Rapid-impact compaction works by vibrating the soil particle matrix to increase its density.

Vibro-compaction involves inserting a weighted probe (or vibroflot) into the ground to apply horizontal vibrations.

Once inserted to the lowest depth of soil to be compacted, the probe is activated and either repeatedly retracted and lowered between the upper and lower target depths, retracted at a set speed or retracted in set increments.

The process is usually repeated several times in a square or triangular grid, depending on the size of the site to be compacted.

Water, air jets or excavation are sometimes used to help the probe reach its target depth. As the soil compacts, a void is created around the probe, and material must be added to the hole to compensate.

Typical treatment depths range from 5–15 m, but vibro-compaction has been performed to depths as great as 35 m.

This technique involves inserting vertical columns of compacted granular backfill into the soil in a triangular or square grid across the site. The process does not use excavation. Instead, it relies on a displacement injection technique, which densifies the surrounding soil.

The backfill is then compacted using one of the other densification techniques (often vibro-compaction), further increasing the density of the surrounding soil.

Stone columns are most effective at treating sands with less than 20% fines but can effectively treat sites with silty sands and sandy silts.

The stone columns are typically spaced 1.5–4.0 m apart and can densify soil to a depth of 4–15 m, but soils as deep as 30 m have been treated using this method.

Stone columns can disperse ground or groundwater contaminants during construction and while in service. Alternative techniques should be used if there is a contamination hazard on or near the site.

The piles are typically made of prestressed concrete or timber and arranged in a square or triangular grid spaced three to four pile diameters apart across the site. They can be driven to depths up to 16 m.

To some extent, the piles may also reduce shear strains in the soil between piles, improving the resistance to liquefaction. This can be a useful advantage when it is impractical to improve the ground through densification alone.

Compaction grouting involves injecting a very stiff grout into the soil under high pressure. The grout does not mix with soil. The injection process causes it to expand into a series of staged bulbs, which push and displace the surrounding soil to increase the adjacent density.

Typically, the grout consists of a soil-cement-water mixture, although the strength of the grout is unimportant, as the technique densifies rather than reinforces the soil.

Since it uses small-scale, manoeuvrable and vibration-free equipment, compaction grouting is especially suited for use below existing structures and in combination with building relevelling applications.

However, the technique can cause ground heave in surface soils that lack sufficient overlying restraint to confine the expansion of the grout.

Resin injection is similar to compaction grouting but involves an aggressively expanding polyurethane resin in place of grout.

Injection tubes are driven into the ground at regular intervals across the site, and controlled volumes of a resin mix are pumped into the soil. The resin mix chemically reacts soon after injection, changing from a fluid to a solid state and rapidly expanding to many times its original volume. This expansion results in densification of the adjacent soils.

In a typical installation, the injection tube is either retracted in stages with set volumes of resin injected at each stage or is slowly withdrawn at a uniform rate while a set volume of resin is injected along the way.

Although applicable to cleared sites, resin injection is particularly suitable for use beneath existing structures.