It is important to understand what causes earthquakes, where they are likely to occur and the hazards they create. Every year, thousands of earthquakes shake New Zealand. Most of them are too small to feel, but some earthquakes generate enough shaking to cause significant damage.

The earthquakes in Wairarapa (1855), the Hawke’s Bay (1931), Edgecumbe (1987) and Darfield and Christchurch (2010–11) all demonstrated that an earthquake can cause widespread damage when centred near a built-up area.

It is important to understand what causes earthquakes, where they are likely to occur and the hazards they create. This will help us design buildings that are better able to withstand the range of damaging effects caused by earthquakes.

It is impossible to predict the exact size and location of the next earthquake. However, scientists and engineers know a great deal about earthquake risk, probable earthquake locations and the range of effects that earthquakes will have on the earth and built structures.

New Zealand is particularly earthquake prone because we are located on the boundary of two of the world’s major tectonic plates – the Pacific Plate and the Australian Plate. New Zealand lies along the boundary of the Australian Plate and the Pacific Plate. (Creative Commons)

These plates are slowly driving against each other, causing one to be pushed past and under the other.

New Zealand is located on the edge of a zone of intense seismic activity known as the Ring of Fire.

This borders the Pacific Plate and includes many of the world’s greatest seismic and volcanic hot spots, including Indonesia, Japan, California, Peru and Chile.

New Zealand lies along the convergent boundary of the westward-moving Pacific Plate and the northward-moving Australian Plate.

The interaction as these plates collide is responsible for much of New Zealand’s geography.

Off the east coast of the North Island and down through Cook Strait, the Pacific Plate is pushing underneath the Australian Plate. This process – called subduction – results in deep earthquakes under the North Island. It is the reason for much of the active volcanism in the North Island, such as Mount Ruapehu, Rotorua’s thermal pools and other areas of volcanic activity . 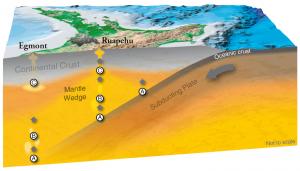 The Ring of Fire has 452 volcanoes and is home to over 75 percent of the world’s active and dormant volcanoes.

Unfortunately for New Zealand, the most intense earthquake activity usually occurs in regions where these processes are taking place.