New Zealand has a large number of faults, but they are not all active at the same time. 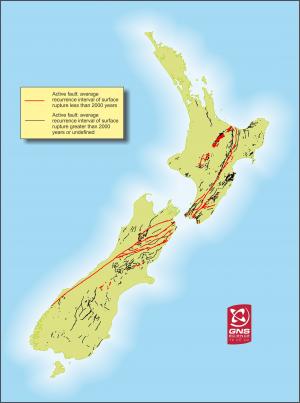 A number of major fault lines are in a band that runs the length of New Zealand. Many of the larger faults are oblique-slip faults, which can cause a combination of horizontal and vertical movement.

The North Island Fault System runs in a line from the Bay of Plenty to the Wellington coast and is responsible for creating the Kaweka, Ruahine, Tararua and Rimutaka mountain ranges. Several major faults run alongside and within this system, including the Wellington Fault.

The Marlborough Fault System is a major sequence of faults in the upper South Island. The faults within this system head southwards and converge to form the Alpine Fault, which carries most of the plate boundary strain in the region. The Alpine Fault is responsible for forming the Southern Alps mountain range, which has been pushed up on the Pacific Plate side of the boundary. It is also a very active fault, and scientists predict it is highly likely to produce a major earthquake within the next 40 years. The South Island has many other fault systems. However, they are smaller and less likely to rupture in the immediate future.

Many smaller faults remain undiscovered until they generate an earthquake. This was the case with the previously unknown Greendale and Port Hills faults, which were responsible for the 2010 Darfield and 2011 Christchurch earthquakes.