Surface waves are typically generated when the source of the earthquake is close to the Earth’s surface.

Surface waves are typically generated when the source of the earthquake is close to the Earth’s surface. As their name suggests, surface waves travel just below the surface of the ground. Although they move even more slowly than S-waves, they can be much larger in amplitude and are often the most destructive type of seismic wave. There are several types of surface wave, but the two most common varieties are Rayleigh waves and Love waves.

Rayleigh waves, also known as ground roll, spread through the ground as ripples, similar to rolling waves on the ocean. Like rolling ocean waves, Rayleigh waves move both vertically and horizontally in a vertical plane pointed in the direction in which the waves are travelling.

Eyewitnesses have claimed to observe Rayleigh waves in large open spaces, such as car parks, where they described the vehicles moving up and down like corks floating on the ocean.

Rayleigh waves are slower than body waves and typically travel at a speed that is 10% slower than S-waves.

Rayleigh waves propagate through the ground as ripples.

Love waves have the same motion as S-waves but without the vertical displacement. They move the ground from side to side in a horizontal plane but at right angles to the direction of propagation. Love waves are particularly damaging to the foundations of structures because of the horizontal ground motion they generate. Love waves can also cause horizontal shearing of the ground. They usually travel slightly faster than Rayleigh waves, at a speed that is usually about 10% slower than S-waves, but like S-waves, they cannot spread through water. 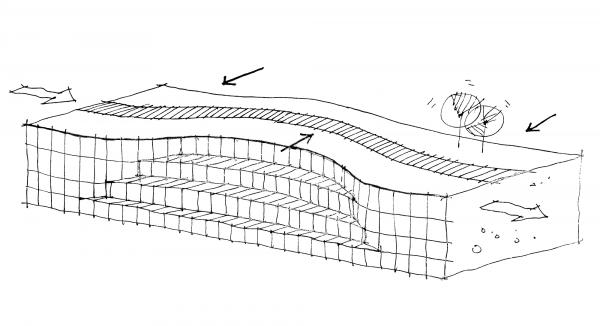 Love waves are particularly damaging to the foundations of structures.