The Building Act does consider compliance of the building work done to upgrade existing buildings.

In terms of the legislative framework, earthquake strengthening is considered the same as standard building work, and all the same building control processes apply. Generally, strengthening work will use a specific engineering design for each case. It is the responsibility of the building owner or designer to prove that all the requirements of the Building Code are met. This may be done in a number of ways, including using Verification Methods, peer review, physical tests or special analysis, for example.

When the intended use of a building changes, its structural performance must be upgraded if the Building Code performance requirements for the new intended use are more onerous than before the change. The upgrade must be done to a standard that is “as nearly as is reasonably practicable” to that of a new building that would be used for the same purpose, including earthquake resistance. The question of what is reasonably practicable is a trade-off between the advantages and disadvantages of upgrading the building to comply with any particular provision of the Building Code.

A building owner intending to change the use of an existing building must give written notice to the building consent authority (BCA). In order that building upgrade requirements are proportionate and not excessively costly for owners, BCAs are required to balance issues of safety and community interests against the cost of improvements.

Building standards have developed considerably over the years, and many existing buildings fall short of the standards now required for new buildings. The objective of the Building Act regarding earthquake-prone buildings is to identify the most vulnerable buildings and reduce the level of risk to people.

a. the building or part will have its ultimate capacity exceeded in a moderate earthquake; and

b. if the building or part were to collapse, the collapse would be likely to cause:

i. injury or death to persons in or near the building or on any other property; or

ii. damage to any other property.

(2) Whether a building or a part of a building is earthquake prone is determined by the territorial authority in whose district the building is situated.

The Building (Specified Systems, Change the Use, and Earthquake-prone Buildings) Regulations define a moderate earthquake as one that would generate shaking at the site of the building that is of the same duration but is one-third as strong as the earthquake shaking (as determined by normal measures of acceleration, velocity and displacement) that would be used to design a new building at that site if it were designed on 1 July 2017.

In practice, an earthquake-prone building is often referred to as one that meets 33% or less of the standard that a new building would be required to meet. This is sometimes called the one-third rule.

A percentage of the new building standard is also sometimes used to describe the earthquake resilience of buildings in general, with higher ratings considered better. This is usually denoted as %NBS.

Most residential buildings are excluded from the system, and there are other exemptions, including special provisions for heritage buildings.

The updated management system introduces several strategies to better deal with earthquake-prone buildings, including notices to inform the public and the concepts of priority buildings and substantial alterations.

An EPB notice is intended to inform building users and the public about the potential seismic performance of an earthquake-prone building. The notice must be prominently displayed on or adjacent to the building where it can be easily seen.

There are three types of EPB notice, each with a distinctive border indicating the building’s earthquake rating. 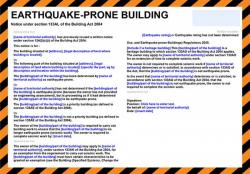 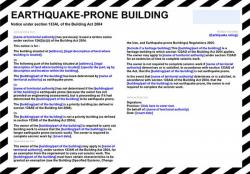 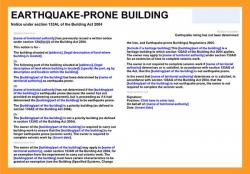 The range of EPB notices. The different borders indicate three different earthquake ratings: 0–20%NBS or no engineering assessment (left), 20–34%NBS (middle) and a section 124 notice prior to 1 July 2017 where no rating is known (right). (Image sourced from MBIE's Earthquake-prone buildings: notices)

A fourth type of EPB notice indicates that a territorial authority has granted an exemption from undertaking seismic work on an earthquake-prone building. 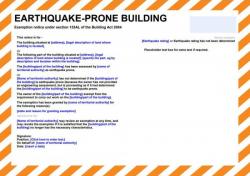 The exemption recognises that, while a building may be earthquake-prone, the risk to life and property is low.

MBIE’s Managing earthquake-prone buildings resource provides a full description of EPB notices and how to use them as well as a range of notice templates.

Certain hospital, emergency and education buildings are prioritised in the Building Act because of their function. Territorial authorities may also identify priority buildings on thoroughfares with high pedestrian and vehicle traffic.

BCAs use a set of criteria to determine whether building work amounts to substantial alterations when they receive a building consent application.