Vertical restraint is often provided by the force due to gravity on the suspended ceiling itself. However, rigid vertical struts may also be required, depending on the seismic zone and the ceiling-to-structure heights.

Joints in the main tees should not be placed within 150 mm of any vertical hanger, strut or bracing connection point.

All step changes in ceiling height must be adequately braced.

Perimeter-fixed ceilings are suspended using vertical wire or cable hangers and laterally restrained by anchoring the edges of the ceiling to the surrounding wall, frame or other structural element. Ceilings of this type are not normally braced. Perimeter fixed suspended ceilings are anchored around the edges of the ceiling.

A perimeter-fixed ceiling should be anchored at the ends of two orthogonal edges of the ceiling grid, maintaining a 10–15 mm sliding clearance at the opposite edges. The free ends must be able to move (slide) against the wall but still be sufficiently restrained to prevent the grid or tiles collapsing. This is typically achieved with a channel moulding or proprietary fixing. 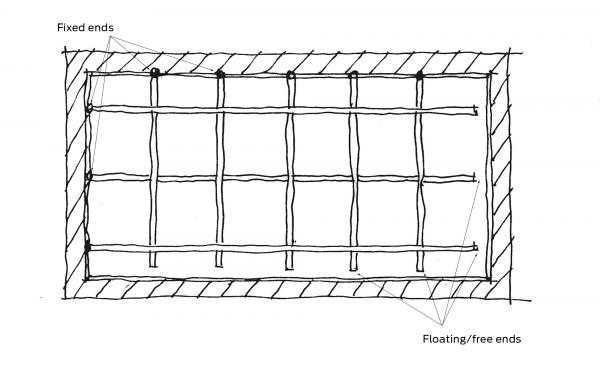 Perimeter fixed ceilings should be fixed along two orthogonal edges and free on the others.

A common cause of damage to perimeter-fixed ceilings in Christchurch was inadequate fixing of the ceiling perimeter to the wall. This was particularly due to undersized or insufficient rivets to connect the grid members to the wall support.

If perimeter fixing is insufficient for the seismic demand, the ceiling must be braced to the structure using another method. Floating ceilings are suspended using vertical hangers and braced to the underside of the floor above to provide lateral restraint. They are not connected to the perimeter wall or frame. The gap between the ceiling and the surrounding wall has to be sufficiently large that the ceiling is not damaged by impacts against the wall during an earthquake.

Vertical suspension may be provided using wire or cable hangers, or vertical struts constructed from angles, metal studs or proprietary compression posts anchored to the ceiling grid and the building structure. Floating suspended ceilings are suspended from above.

Lateral bracing in a floating ceiling can be provided by using rigid braces, cable braces (splay wires) combined with vertical struts, or a combination of these techniques. In each case, the seismic braces should be designed to enable the suspended ceiling to carry the seismic demand load .

Rigid braces should be installed in pairs orthogonal to each other and in combination with a vertical hanger or strut. They should be at a maximum angle of 45° from the plane of the ceiling grid. The braces should be as close as possible to the same vertical plane as the main and cross tees. Cable-only and wire-only braces are not as rigid as angle braces, but their performance is improved by using them in conjunction with vertical struts. A bridging system should be used where the correct clearances cannot be achieved or suitable hanger points cannot be accessed because of obstructions in the ceiling space.

Hangers should be spaced at centres of no more than 1.2 m and be within 9.5° of vertical (1:6), unless using counter-sloping wires. Floating terminal ends of each main and cross tee should be supported with a perimeter wire located within 200 mm of each wall.

Hanger wires should be 2.5 mm in diameter, with top and bottom connections secured using at least three complete tight turns extending no more than 75 mm along the cable.

Both perimeter-fixed and floating suspended ceilings must be designed to support ceiling-mounted distributed services up to a load of 3 kg/m2 under seismic conditions. Where service loads are greater than 3 kg/m2, the ceiling designer should be advised. For ceilings longer than 2.4 m, the maximum allowable deflection is L/360.

A suspended ceiling must not be used to support plant or equipment that weighs more than 10 kg. Any such plant or equipment in the ceiling space must be separately supported and also maintain the relevant clearances given in NZS 4219:2009.

Where a suspended ceiling is used to support equipment, it should be positively fixed to the ceiling suspension system, not supported by the ceiling panels or tiles.

Flexible connections should also be used between ceiling-supported equipment and ducts, pipes or cables that are supported by the structure.

All lighting fixtures that are mounted on a suspended ceiling, including detachable accessories (such as diffusers and light controllers), should use a positive locking mechanism to prevent them inadvertently disengaging during an earthquake.