This section describes some of the design and construction techniques and devices commonly used to create a low-damage building using structural steel.

The size of the steel members, which partially determines the strength of the frame, is often controlled by other factors, such as gravity and wind loads, rather than seismic loads. However, they must be designed with sufficient ductility to avoid a sudden failure in a large earthquake, for example, from buckling.

Steel is an effective material for bracing steel frames, and eccentric braced frames are widely used in New Zealand. There are also a significant number of low to medium-rise buildings that use concentrically braced frames. The braces may be designed to work in tension or compression.

Generally, steel braces have a high degree of strength and stiffness as well as high ductility , which also gives them a damping characteristic. Some braces enhance this effect by adding additional dissipative components to the brace.

However, steel braces, especially eccentric steel braces, are susceptible to buckling if the brace is not sufficiently reinforced, and repeated tension and compression cycles can cause the steel to fatigue and break. 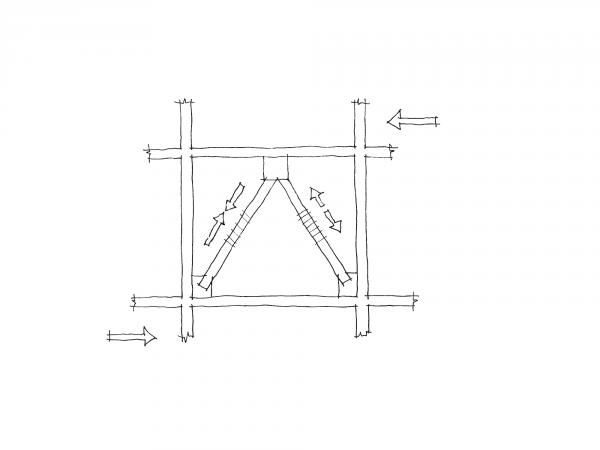 Post-tensioning in steel uses the same principle as the post-tensioned techniques described for concrete. The system uses a series of jointed steel members connected together with post-tensioning tendons to create a moment frame.

During a minor earthquake, the additional frame stiffness provided by the tendon tensioning reduces movement of the structure. When exposed to larger lateral seismic forces, the structure will oscillate or rock as the elastic action of the tendons allows gaps to open and close between individual members within the frame. The tendons pull the structure back into its original position as the shaking subsides.

Some designs place damping devices across the gaps to dissipate energy during the rocking.

A relatively new idea that is still under development proposes to ‘tie down’ the entire structure simultaneously by running a single post-tensioned steel tendon from the top of the frame to the foundation. 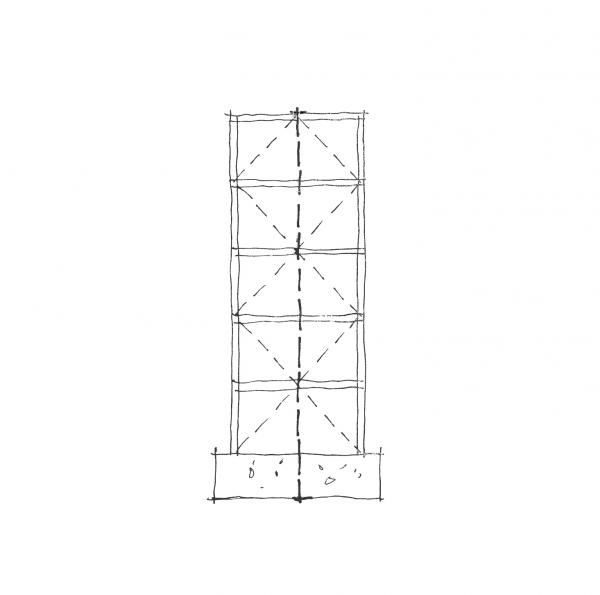 Like all structures that use post-tensioning techniques, steel-framed buildings are susceptible to beam elongation and the damage it can cause.

Like concrete, steel-framed buildings can use a wide variety of damping devices to reduce seismic forces in the structure.

Although technically part of the eccentric brace system, a link beam is designed to dissipate energy by yielding in shear. Following an earthquake, they are intended to be unbolted and replaced. Depending on how easy the beams are to access and replace, this can be a time-consuming and expensive process.

Another damping brace, the buckling restrained brace or tension-compression brace, is a type of hysteretic damper . It consists of a diagonal concentric steel brace that is designed to yield under both tension and compression.

The restraint is usually some form of high-strength casing that encloses the steel brace while allowing it to slide freely.

During an earthquake, the yield is designed to be distributed along the full length of the brace, reducing the likelihood of fatigue failure. However, like a link beam, a restrained brace may be damaged during a major earthquake and require replacement. Friction dampers are a class of device that use metal surfaces in friction to dissipate seismic energy by converting it into heat as they rub together. Typically, a friction damper consists of several steel plates sliding against each other in opposite directions. The steel plates are separated by layers of friction pad material, like the brakes in a car.

Friction dampers are not used by themselves but become part of other structural systems, such as diagonal bracing, to add friction damping to the structure. Friction dampers can take several forms, but there are two basic varieties – symmetrical and asymmetrical – depending on the type of bracing that they are combined with.

Operation of a symmetrical friction damper.

Also a damping brace, a friction brace combines a concentric or eccentric brace with a friction damper to add energy dissipation to the system.

Friction braces provide a similar level of damping under both tension and compression loads, but they require careful design to ensure they do not buckle out of plane under compression. Also, friction braces have no self-centring action and must be combined with other systems if this characteristic is required in the building design. 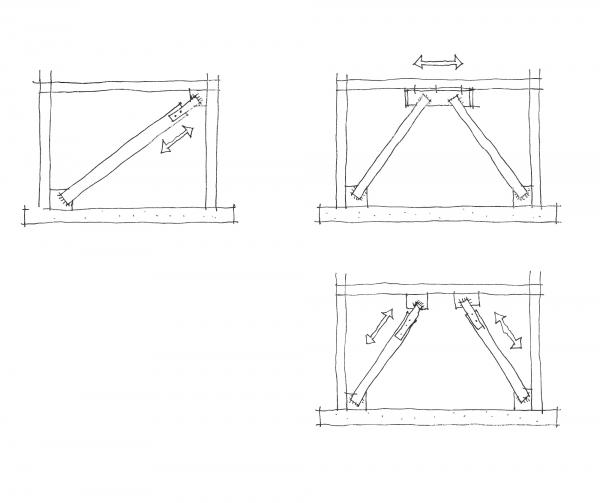 During an earthquake, the joint allows the beam to rotate around the top flange plate. As the frame moves, the bottom of the beam and bottom flange plate slide against the friction plate. This dampens the movement and reduces the likelihood of yield in the main structural elements.

However, the technique is not entirely self-centring due to the additional friction in the system. Spring joints can be used in rocking structures. They use a series of high-strength springs to couple the base of the steel frame to the foundation.

During an earthquake, the frame is still able to rock according to its post-tensioned design. However, as soon as the column foot begins to lift, the spring compresses and applies a restorative and damping force. The spring also remains undamaged.

Like other dampers, spring joint systems protect the foundation and column foot from impact damage while the building rocks. They also act with the post-tensioning system to return the structure to its original upright position.

The springs also increase the force required to produce uplift, which increases the overall stiffness of the structure and reduces frame displacements. 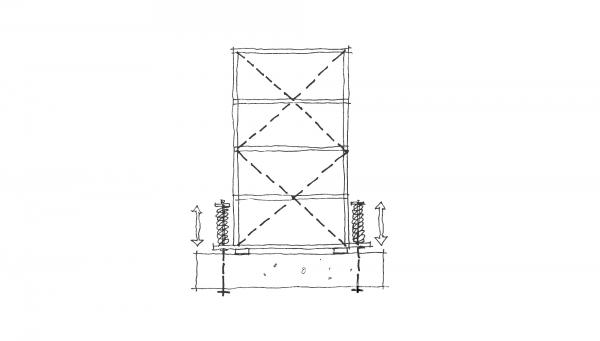 Self-centring cables attached to springs at the bottom of the frame legs. The foundation must have sufficient mass to resist uplift of the foundation as the springs compress.